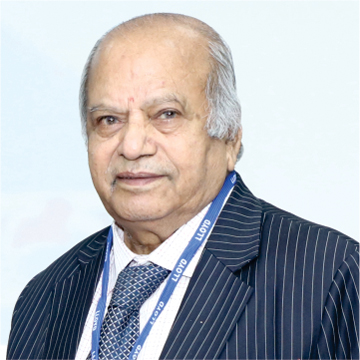 He got his Diploma in Pharmacy from Punjab University, Amritsar in the year 1956. He earned his B. Pharm and M. Pharm from College of Pharmacy, (DIPSAR) University of Delhi. He got commissioned in the Army in N.C.C in 1966 from NCC officers Training School, Kamtee, Nagpur. Shri Nasa has been actively engaged in development and Regulation of Pharmacy Education in India, has 31 years teaching Experience in various levels at College of Pharmacy, Delhi (Delhi Institute of Pharmaceutical Sciences & Research) from 1964 to 1995 teaching Diploma Pharmacy & Bachelor Pharmacy & Post Graduate Pharmacy Students in Pharmaceutics & Hospital Pharmacy. He guided number of students in M. Pharm in Hospital Pharmacy. He is external examiner in various universities and Technical Education Boards. He has presented & published number of scientific papers in the National & International Conferences. He is One of the founder members of the IHPA (1963) & IPGA (1973) He was the Executive Secretary of All Indian Small Scale Manufacturers Association and editor of their Official Journal “AISSPMA” & Executive Director of Bulk Drug Manufacturers Association of Delhi Division. He was advisor in Paam Group of Companies from 1996 to 2004. His Professional excellence has been recognized by the award of Best Pharmacist by Railway Pharmacists Association in the year 1990. M.L.Schroff Memorial National Award by IHPA (1993) for his contribution to Institutional Pharmacy and Best Teacher Award in Pharmacy by the Govt. of Delhi in the year 1994 for his meritorious services in the profession of Pharmacy, Best Pharmacist Award by C.G.H.S. Pharmacists Association in the year 1998. He has also been awarded by Fellowship Award by Institute of Chemists in the year 1988 & Fellowship Award by Indian Pharmaceutical Association (IPA) in the year 2003. He has been conferred with Life Time Achievement Award in the year 2009 by the Indian Hospital Pharmacists Association, U.P. State Branch. He has been awarded the best alumni award by the College of Pharmacy (DIPSAR), Delhi.